In October of 2017, I was part of the State of Colorado Disaster Behavioral Health Team deployed through the Emergency Management Assistance Compact system to support the devastation left by Hurricane Maria in Puerto Rico.  To the best of our knowledge, this team is the first behavioral health team to be requested and deployed in a disaster such as Hurricane Maria.  Our mission was to provide Psychological First Aid to the people of Puerto Rico.  I was able to provide acupuncture in an effort to heal psycho-social trauma in a variety of locations and treating many of the responders such as military personnel, law enforcement, FEMA workers, insurance adjusters, truck drivers, etc.

Because I was part of a team that was requested by a formal system, I was housed with the FEMA operation along with all of the other responders.  We were all housed together on military training vessels and cruise ships, so there were many opportunities available to network and support the responders to Hurricane Maria.  I had about one case of needles left over at the end of the deployment, so I handed them off to a local Coast Guard member I became friends with and asked him to pass them onto local acupuncturists (photo below).  During the deployment I was asked on many occasions, “why and how an acupuncturist became involved.”   I feel this opportunity helped opened the door for acupuncturists to integrate into an emergency deployment and being part of a federally funded team.  Since this deployment, I have had many discussions with FEMA regional representatives about this deployment and the future possibility of more acupuncture integration. 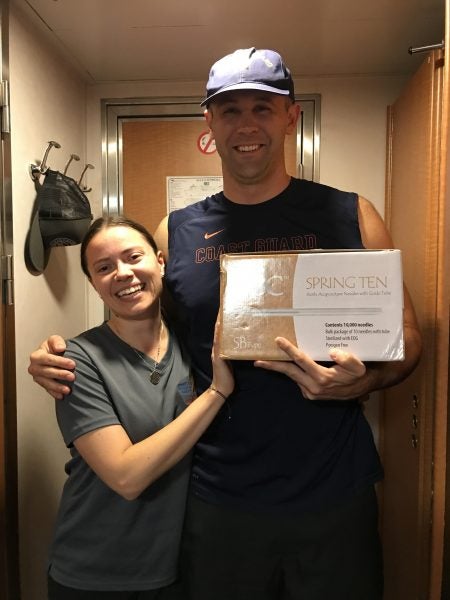