LEARN MORE ABOUT ACUPUNCTURISTS WITHOUT BORDERS

MATAMOROS, Mexico – For months, Carlos Lopez’s mind has been endlessly spinning with the fears and anxiety of leaving his home country of Honduras, traveling 1,700 miles with his 13-year-old son to this Mexican border town and the day-to-day survival of living in a squalid tent city.

But on a recent Tuesday, Lopez closed his eyes and slipped into a blank, blissful, meditative peace. Five small needles protruded from each ear.

“All the bad thoughts went away,” Lopez, 41, said, as he emerged from his 45-minute-long acupuncture session. “All I knew is that I was there and that I was relaxed. It was beautiful.”

Lopez is one of a growing number of migrants stuck on the border under President Donald Trump’s Migration Protection Protocols policy – which sends migrants to Mexican border towns to await their immigration court hearing in the U.S. To help the migrants pass the time and deal with stress, teams of volunteers led by Acupuncturists Without Borders, or AWB, a nonprofit that treats people in disaster zones and refugee camps and trains other acupuncturists around the world, are providing Lopez and others with free acupuncture treatment at border towns in Mexico.

The acupuncturists use a five-point protocol known as NADA, where five needles are stuck in specific points in the ear to reduce stress. The group has helped hundreds of migrants in Mexican border camps this year, said Diana Fried, AWB’s founder and co-executive director. For migrants who don’t want the needles, there are tiny Chinese radish seeds that can be adhered to the ear, to similar effect. 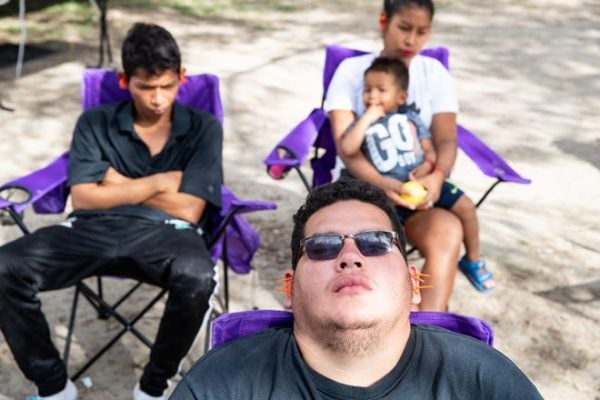 So far, the group has treated migrants in Matamoros and Tijuana but hope to expand the program across the border.

“They’ve been through enormous levels of challenges,” Fried said. “It’s a very powerful experience for people who are in such a state of trauma to experience such a simple healing treatment.”

Matamoros might need it the most, immigrant advocates said. Since the MPP policy took hold here this year, more than 1,500 migrants have been stuck just on the other side of the bridge from Brownsville, Texas, awaiting their court date.

Hundreds of tents, many of them donated by volunteers, sprouted to house the migrants, creating a sprawling, tent city. Volunteers with groups like Team Brownsville and Angry Tias and Abuelas (or angry aunts and grandmothers) cross over nearly daily, handing out food and supplies such as blankets, sweaters, diapers and baby formula. Small children play in the dirt or splash around in the nearby muddy Rio Grande, as women cook beans in homemade earthen hearths.

The squalid environs have worsened mental health outlooks for migrants who have already absorbed staggering levels of stress and trauma, advocates said.

Migrants acquire stress from the trauma they’ve experienced in their home country, from the arduous journey to reach the U.S. border and, more recently, from being mired in dangerous Mexican border towns to await their court date, said Krish O’Mara Vignarajah, chief executive of the Baltimore-based Lutheran Immigrant and Refugee Services, a nonprofit that helps immigrants.

About two-thirds of the youth migrants at the center have experienced a traumatic event in their home country, and about one-third experienced at least one or two traumatic events on the trip to the border, Vignarajah said. That manifests itself in anxiety, depression and post-traumatic stress disorder in legions of migrants entering the U.S., she said.

Once here, migrants also face greater obstacles than ever to remain in the U.S. and lack of access to mental health services, Vignarajah said.

“Arriving in America used to represent hope and some form of respite and protection,” she said. “But today these children and family are forced into a much different reality.”

Vignarajah applauded the efforts by groups such as AWB but said the mental health issues of migrants is fixable only by government action.

“The reality is these are just bandages,” Vignarajah said. “Unless we address a broken system, we are going to continue to see children, parents who are suffering with no end in sight.”

Fried, 61, who got into acupuncture as a way of quitting a 20-year smoking habit, started AWB by taking a group of fellow volunteer acupuncturists down to New Orleans shortly after Hurricane Katrina ravaged the Gulf Coast in 2005. Camped out in a FEMA tent city in Algiers, across the Mississippi River from New Orleans, they treated residents, first responders, roofers, construction workers and federal officials – more than 8,000 people in the course of a year.

Fried said she chose the NADA five-point protocol because, unlike other acupuncture treatments, it could be used in group settings and requires no talking. Started in the 1970s as a way to combat heroin addiction, the treatment requires five needles poked into specific points in the ear that, according to ancient Chinese medicine theories, alters the autonomic nervous system, lowering stress levels and enhancing relaxation, Fried said.

“It’s really a deep powerful, healing treatment for stress, trauma and just relaxing the whole nervous system,” she said. “People who have been through crisis are able to come back to themselves.”

“At first, (the migrants) are a little hesitant,” said Canda LePage, of Team Brownsville, who escorts the acupuncturists into Matamoros. “Then, I love to see their bodies just relax and see them fall asleep during treatments. It really de-stresses you.”

Before crossing over into Matamoros recently, the team from AWB met in the lobby of a Brownsville hotel to go over strategy. They were joined by Cindy Candia, one of the founders of Angry Tias and Abuelas, who told the group that an asylum-seeker in the tent city who helped them sort donations had recently been beaten up by street thugs. They should set up the acupuncture clinic in a different location of the sprawling camp, she said.

Candia said she wasn’t familiar with acupuncture before she got a call from Fried, asking her to help them get into Matamoros. Now, she and other advocates also get regular treatments from the group.

“She just explained it could release stress, and I said, ‘Good God, yes!’” Candia said. “It was such a relief, I just started crying. To have someone reach out and offer relief.”

That morning, the group drove to the International Bridge and parked in a nearby Greyhound bus station. They walked across the bridge into Mexico, pulling wheeled carts filled with 30 folding armchairs, a folding table, needles, alcohol swabs and other supplies, as well as a bin full of coloring books and toys to distract young children while the moms and dads get treatment.

They set up the folding chairs in the shade of a sweet acacia tree and propped open the folding table. A Bluetooth speaker played flute music and the sound of gently running water.

Migrants were hesitant at first, hovering nearby then drifting away when the needles emerged. Two men sat down to try the treatment. Then a woman and her 10-year-old daughter. Then two more women. Within half an hour, nearly all 30 chairs were filled with migrants ranging in age from 10 to 60, eyes closed in meditation, needles sticking out of ears.

Karla Moradel, from Honduras, said she was hesitant at first to try the treatment, thinking it would hurt like an injection. It didn’t, and she eventually emerged from the treatment with a soft smile.

“I feel much better,” she said.

Moradel had been at the camp for three months with her 5-year-old son, Delme. She said life at the camp was hard. She shares a tent with her son and doesn’t sleep much, constantly watching to see if someone enters their tent.

“It’s very difficult here,” Moradel said. “You’re constantly thinking about survival, about what to eat. … I just hope this helps me sleep tonight.”

Lopez, the Honduran native, said it took him about two months to reach the border from his hometown of Copán. Along the way, he was attacked by street thugs in Monterrey, Mexico, and robbed of the money he had left, around $77. He’s been deported from Mexico twice and finally reached the U.S. in August, only to be sent back to Matamoros to await his court hearing, which is set for late January.

“Psychologically, my mind is bad,” he said. “You’re always thinking: Will I eat today? Will I sleep? You’re never at ease.”

He pointed to the teams of acupuncturists carefully applying needles to migrants’ ears nearby.

“It really works,” Lopez said. “I finally feel like I have control. I could finally stop thinking.”